The International Peace Accelerator was founded to be a unique conduit aimed at filling a vacuum in the regional and international arena by presenting an independent, non-governmental, non-for-profit, non-partisan and unbiased organization acting as an icebreaker of conflict barriers for leaderships. Our initial focus is the Arab-Israeli-Palestinian conflict, and the Israeli – Palestinian conflict within it.

Contribute to a meaningful event, or a series of events, by the end of year 2022 that will lead to peace agreements between most of the Arab world including Palestine, and Israel, and to sustainable independency, stability, and security for all the involved parties.

IPA Focus: The Elephants that are Blocking the Negotiation Room.

Based on IPA’s extensive research, it’s not only the commonly called ‘core issues’ that prevent a breakthrough in the Israeli – Palestinian conflict. There are specific Elephants in the negotiation room (unaddressed challenges) that prevent the parties from even starting a negotiation process. These Elephants also drive away the public opinion from seeking a peace agreement.

3 main Elephants that are blocking the Palestinian way:

3 main Elephants that are blocking the Israeli way:

We connect experts, security people, diplomates, policy makers, and politicians, from the international community,  the Arab states, Israel, and the Palestinian territories, for the purpose of overcoming the barriers of the Elephants, as a conduit for a new Peace process.

Not only do we prefer wearing jeans and T-shirts, but we’re great believers in innovations, in free spirit, and in the new generation of people who look less at the past and more into the future. We call this non-formal entrepreneurial approach: “T-shirt Diplomacy”.

As part of the facilitation process, IPA meets frequently, as a team, and individually, with Arab, Israeli and international leaders and thought leaders, to get their advice and feedback and to work together on facilitating innovative processes that will enable the parties to break barriers and move forward, sooner than later. 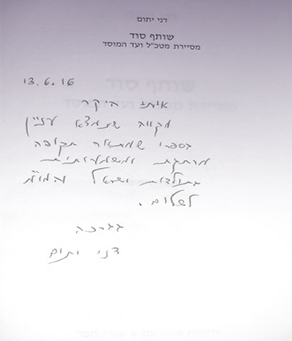 Dani Yatom, former head of the Mossad, following an advice meeting with Itai.